Summer Board Meeting closes 2013 with new members, and set the road to the 2014 Best Practices Showcase. 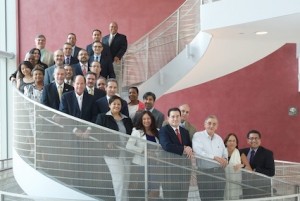 With an outstanding attendance of 27 presidents and representatives from our current 40 institutional members, HETS celebrated its summer Board Meeting on June 25 and 26, 2013 in New York. This meeting was hosted by Borough of Manhattan Community College in its recently opened Fitterman Hall building. This Board meeting closes the academic year 2012-2013 envisioning numerous new projects for next academic year, including the 2014 Best Practices Showcase.

HETS shared the exciting news of its expansion not only among Puerto Rico and USA, but in Latin America. Additional HETS initiatives shared with the Board included the following:

We look forward to continue strengthening our HETS initiatives the upcoming year to foster a greater collaboration among all of our affiliates and widen our partnerships with other organizations, as we continue celebrating 20 years of continuous services. For more information about HETS projects, please contact the HETS office anytime.