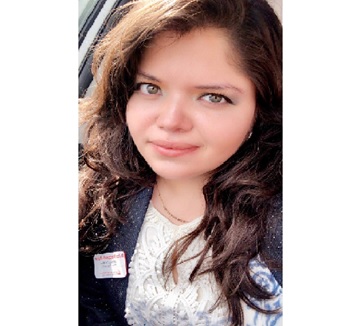 Originally from the Federal District of Mexico City, Dulce Maldonado Muñoz moved to the United States at a young age and in 2013 received DACA status. Following high school, she completed an Associate of Arts Degree at Arkansas Northeastern College (ANC) with a Board’s Scholarship in December 2015.

After receiving her Associate of Arts Degree, Dulce transferred to Southeast Missouri State University to complete her undergraduate degree. At Southeast, she was the president of Student Organization of Latinos during one academic year and continues to be an active member of the group. Dulce graduated in December 2017 with a Bachelor’s of Science in Mass Communications with an emphasis in Public Relations and a minor in Spanish. In 2018, she started her career as an Admission Counselor for Southeast. Since August of 2019 she was promoted to become a Multicultural Recruitment Counselor to specifically provide guidance for Hispanic-Latino communities in matriculating into the University.