Board members gathered to celebrate 20 years of the Consortium as part of the activities of its winter meeting in San Juan.

With an outstanding attendance of presidents and representatives from 32 out of 41 institutional members, HETS celebrated its winter Board Meeting on January 16 and 17, 2013 in Puerto Rico. This time the meeting was hosted by the Universidad del Sagrado Corazón. This Board meeting closes the first semester of the academic year 2013-2014 and receives 2014; a very exciting year for the organization and its members, as HETS continues to commemorate its 20th Anniversary with envisioned new projects.

As part of the festivities of the Consortia’s 20th anniversary 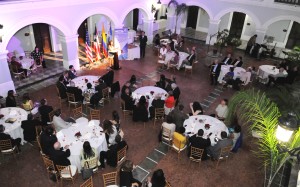 celebration, Board members and special invitees gathered at the Department of State of Puerto Rico in Old San Juan in a cultural night on January 15. During the celebration, sponsored by the Department of State of PR, HETS founding members and special collaborators were awarded in a very exciting ceremony. The protocol was followed by a fashion show presented by the students of the fashion design department of the Universidad del Turabo, from the Ana G. Méndez University System. As part of this celebration, a special section has been added to our website called: HETS: State of the Art Vision for 20 years. We invite you to read it and learn more about the trajectory during our first 20 years of existence.

The agenda continued the day after with the opening session of the 2014 HETS Best Practices Showcase and the first day of Board members meeting. Among the exiting news shared with the Board of Directors, one was the fact that the following new institutional members and corporate partners just joined the HETS Consortium:

Additional HETS initiatives shared with the Board included: new services that were 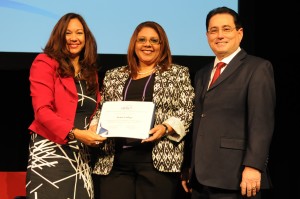 added to the HETS Virtual Plaza; the redesigned of the HETS Spanish online workshops offered last semester; two new online workshops in English ready to deliver in a self-paced modality; twelve approved for publication at the HETS Online Journal on the Fall issue; and the status of the approved HETS Strategic Plan results so far.

As usual during this Board meeting, the HETS Annual Report was shared and distributed to the attendees. Click here to access the PDF version of the HETS Annual Report for 2012-13 for your information. We look forward to continue strengthening our HETS initiatives this year to foster a greater collaboration among all of our affiliates and widen our partnerships with other organizations. For more information about HETS projects, please contact the HETS office 787-766-2600 ext. 8910, 8911.