During the meeting, the Board discussed HETS’s achievements during the past year, and explored a series of key priorities for the years to come,

HETS Chairman Fernós observes Dr. Martí during his farewell speech to Board Members

including the HETS Best Practices Showcase in combination with a Virtual Showcase. The Board also made important decisions regarding the establishment of voting members and development of the approved HETS Strategic Plan for the next five years. During the corporate session was presented the newest partner, Grupo Parada which with their Major Corporate partnership intends to amplify HETS services abroad to develop and open up further opportunities for HETS among Hispanics.  The meeting gathered Board members and representatives from 22 member institutions.  As part of the meeting, the Board also recognized HETS former Chairman, Dr. Eduardo Martí, on his retirement and were thankful of his commitment and valuable contributions to HETS during the past nine years. 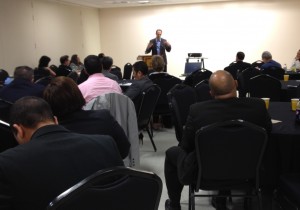 Along with the Board Meeting, Distance Learning Directors, from different HETS member institutions had the opportunity to discuss relevant topics on access, retention and assessment related to distance learning.  Round table discussion  included representation from: Borough of Manhattan Community College, Bronx Community College, Hostos Community College, John Jay College of Criminal Justice, Lehman College (New York); Berkeley College (New York and New Jersey); Caribbean University, EDP College, National University College Online, Universidad del Sagrado Corazón (PR); and Kutztown University (Pennsylvania). Closing session of this event, also hosted by Bronx Community College President, Dr. Carole Berrotte Joseph, included the presentation of the round table discussions to the HETS Board members.  Lehman College collaborated with the video recording of the presentations to the Board.  To watch the video of this event please visit HETS TV channel in You Tube and click on the Distance Learning Directors  Event recording to benefit from the discussion of this relevant topic.