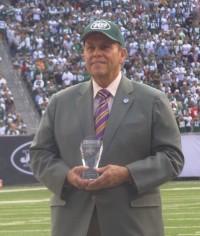 The HETS office wants to congratulate Dr. Ricardo Fernández, Lehman College President, for his recent achievement, the receipt of the NFL Hispanic Heritage Award.  Lehman College is one of the HETS founding members that initiated the Consortium in 1993.  Dr. Fernández has been part of the HETS Board of Directors ever since.

BRONX, N.Y. — Lehman College President Ricardo R. Fernández received the NFL Hispanic Heritage Leadership Award on Sept. 18 during the Jets game against the Jacksonville Jaguars at MetLife Stadium. The Jets went on to win the game, 32-3.

The award to President Fernández was given in recognition of his 21 years of service at Lehman College and his long-time leadership and advocacy in his community. He is the longest-serving of the 23 current CUNY presidents.

“I was very proud to accept this award on behalf of the faculty, students and staff of Lehman College of The City University of New York,” said President Fernández. “Our students come from throughout the metropolitan area and from more than 90 nations. They go on to contribute in important ways to the vitality of our city and state, and this award recognizes their achievements as well.”

The day launched a league-wide celebration of Hispanic Heritage Month (September 15– October 15, 2011) and included a variety of cultural entertainment, performances, and activities that reflect the diversity of New York’s Latino population, the second largest in the country.

By HETS & Lehman College Office of Media Relations and Publications