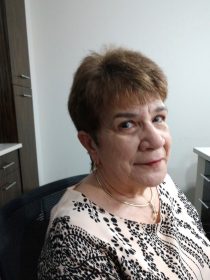 From 1970 through 2009 held all faculty ranks, retiring as a professor,  in the Department of Biology at the University of Puerto Rico –Humacao. Dr. Colon Plumey served as Chancellor of UPR – Humacao from 2002 through 2009. In 2010,  joined the President‘s Office staff at the Ana G. Mendez University System in Puerto Rico, serving as Special Assistant to the System President (2010-2012) and later as Associate Vice President of the System (2012-2017). From 2013 through 2017 she also served as Co-Principal Investigator and Education and Public Outreach Deputy Director of Puerto Rico’s Arecibo Observatory. In addition, Dr. Colon has served as an evaluation team member and team chair on behalf of MSCHE 5. Dr. Colon served as Vice president for Institutional Field Relations in MSCHE to 86 institutions throughout the Middle States region, until July 31, 2020 when she retired.