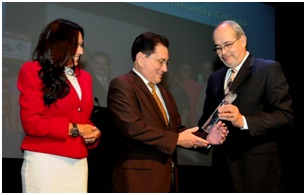 HETS also honored President Fernós with a collage of pictures which evidence President Fernós’ support and dedication to this organization. Finally, some details about his extraordinary career where shared with the audience, as part of this award presentation.

This is the second time this HETS Visionary Leadership Award was presented to a Board Member in the 19 years of HETS existence as an organization. This award is presented only when the Board of Directors identifies a Board member who works and achievements are outstanding. President Fernós was selected to receive this award, due to his excellence guiding a centenary institution like IAUPR, and also for his commitment accepting for a second time the position as HETS Chair of the Board of Directors. His election was held last June, 2012, during the Board of Directors meeting held on Bronx Community College in New York. The term for this position is for two years, with the possibility to be re-elected for a second period of two more years. His first term as Chair of the HETS Board of Directors was for two consecutive terms of two years each starting in June 2003 until June 2006.