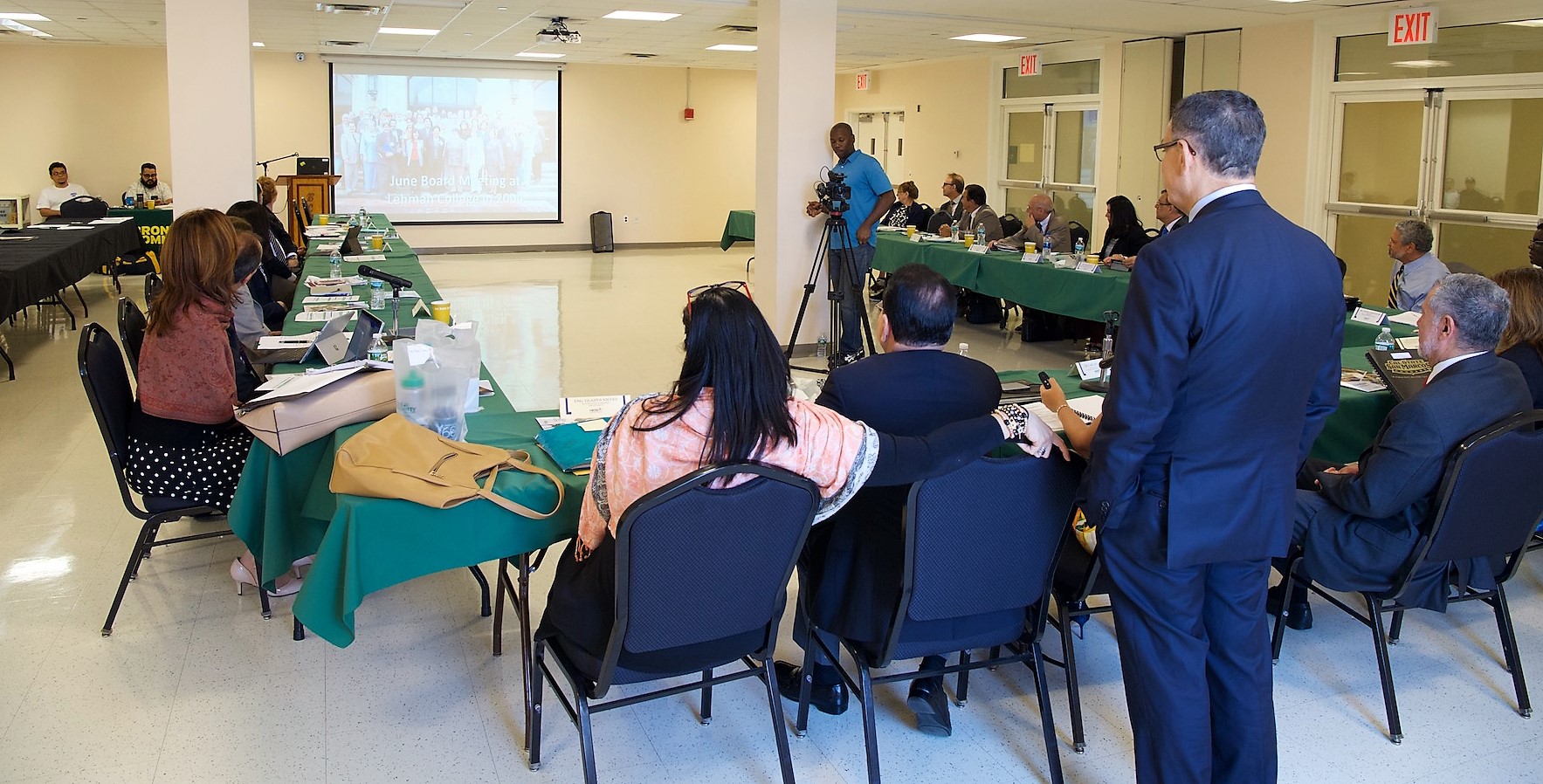 Dr. Antonio Pérez: A Recognition to a One of a Kind Board Member.

President Perez expressing his appreciation to HETS organization and fellow Board Members. Here with HETS Executive Committee and Executive Director.

HETS celebrated it’s summer Board of Directors meeting closing academic year 2017-18, and starting the celebration of its 25th anniversary on July 12 and 13, 2018 in Bronx, NY. This was an excellent opportunity to surprise Dr. Antonio Pérez, President of Borough of Manhattan Community College, on his last participation on this meeting as one of our Board Members since 1999. He also was invited to give the main speech during the first event of the HETS anniversary celebration. Perez watching his path through HETS since 1999 on a photo compilation. Receiving tokens of appreciation, from colleagues and friends.

President Antonio Pérez announced earlier this year, that will step down after having served with 23 years of leadership at the college, and almost 20 as an active Board Member of the Hispanic Education Technology Services (HETS) Consortium. President Perez has always vividly supported our mission to promote, support and enhance Hispanic/ Latino student access, retention, and success in Higher Education through the strategic integration of technology. This has been proven during his tenure as Board Member in our Consortia, in which he has actively served as Board Officer in the Executive Committee (for several terms) as: Treasurer, Vice Chair, and the last two years as HETS Regional Representative for the East Coast. As part of the meeting agenda; HETS Chair, Dr. Carlos Vargas; HETS Treasurer Manuel Fernos, Esq.; and HETS Executive Director, Yubelkys Montalvo, along with the rest of the Board present, thanked President Pérez for his commitment to the organization, supporting our initiatives, and expanding HETS membership. Board members presented very special gifts to him as their token of appreciation while he watched a compilation of photos of his path through HETS (click here to watch the photos).

President Pérez will be leaving his leadership at BMCC to pursue other opportunities in New York City higher education, and express that will still collaborate with HETS. Following the farewell ceremony, a motion was presented during the meeting by HETS Secretary, Eng. Gladys Nieves, to nominate Dr. Pérez as part of the recently constituted Advisory Board of the HETS Board of Directors. After being approved without hesitation by the Board, Dr. Pérez accepted the invitation to be part of this exclusive group constituted of nominated ex Board Members.

The Hispanic Educational Technology Services (HETS) was established in 1993. HETS is the first bilingual consortium constituted by more than 40 higher education institutions in Puerto Rico, United Sates and Latin America. The organization’s mission is to expand the educational opportunities and the access to post-secondary education to the Hispanic community to support the capacities of its member institutions. To learn more about HETS and our mission you can contact us by sending an email to info@hets.org.

Due to the great support we have received in our Academy, we extended the deadline to June 28th! We are still accepting applications for the H-LTLA. See the video of @jmelendezpr about his topic: Instructional/Curriculum as part of the H-LTLA Faculty. 🔗https://hets.org/hets-learning-technologies-leadership-academy-h-ltla/

So pleased for the support to this initiative. You still have time to join this first edition of the HETS Academy!

Due to the great support and interest we have received in our Academy, we extended the deadline to June 28th! We are still accepting applications for the 1st Edition of the HETS Learning Technologies Leadership Academy (H-LTLA), a professional development program focused on developing the next generation leaders to serve at HSIs. The curriculum will be in English or Spanish. See the video of Dr. Juan Tito Melendez Alicea about his topic: Instructional/Curriculum as part of the H-LTLA Faculty. Visit the following link to find more information about the Academy: 🔗https://hets.org/hets-learning-technologies-leadership-academy-h-ltla/ ... See MoreSee Less